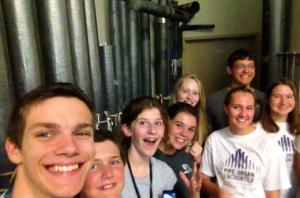 This is a mass selfie (a groupie?) from about a week ago. These are high schoolers touring the Bedient Pipe Organ Company. They are real teens, who got on a bus, and toured four churches and a pipe organ builder one day in the middle of July. Pipe Organ Encounters (POEs) happen all over the US, and the kids who participate are wild about pipe organs.

“We had Masterclasses/lectures on how the Organ is made and even went to Bedient Organ Shop! It was an AMAZING experience and I recommend it to EVERYONE!” Michael, a POE student, wrote on Facebook. He posted picture after picture of kids having a fantastic time looking at and interacting with pipe organs. I’m going to say it again, THEY WERE ALL EXCITED ABOUT PIPE ORGANS! You might not think this is normal, but it is. The smallest children are totally captivated by the instrument. It’s HUGE. You can make it play different sounds. And the coolest part, is you can play it with your feet! Did you ever see Big with Tom Hanks? It’s the same thing…

So, why am I yacking on and on about pipe organs? Because I think marketers sometimes don’t really understand teens. We make assumptions about what they like, based on our own biases. We associate pipe organs with church services we might have been forced to attend as children. Services that maybe even our parents stopped attending after we were confirmed. If we attend church, it has a praise band, which is cool, right? Teens see pipe organs differently. They see amazing pieces of technology you can watch work. Teens see gigantic instruments that dwarf the people who play them. They see power. They see awesomeness! And you can play them with your feet!

Above, is what these young enthusiasts see. They see a guy, dwarfed by an enormous instrument, surrounded by knobs, playing three keyboards (manuals) and a pedal board at the same time. It’s like extreme musicianship. The POE kids are a lot like their friends, who are sampling stuff and mixing their own songs. They love the technology, the mixing and matching, the power of big sounds. After all, a 32-foot Contrebombarde was the original subbass. So, why do we think more kids want to sit in their basements and sample music than want to harness the power of an instrument that is 50 times larger than they are?

Coolness comes in a lot of flavors. Don’t box in younger audiences. The best thing you can do to attract a young market, is to find the coolness factor in your product and let them know about it. It’s cool, because they think it’s cool. Show it to them, they’ll let you know how cool it is.

2 thoughts on “All the Cool Kids are into Pipe Organs”